20th FIFA Brazil/ Brasil world cup final 2014 will be held on 13th July 2014 between two teams are Germany vs Argentina. The match will be create a new era of World cup all records since 1934 to present times. Argentina and Germany is too powerful football teams in the whole football teams as every countries. 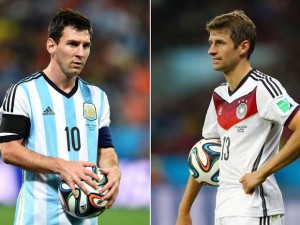 On the other hands Germany was a very energetic and powerful team on 8th July 2014. Germany each player had very much spirit. For this reason they were 7 goals had give of Brazil. On this day goals were Thomas Muller, Miroslave Klose, Toni Kroos and Andre Schuerrle.

Argentina and Germany teams are very excited win 20th FIFA world cup 2014. Germany coach and Germany players together said that’s, they will be play a good football, so they are win or champions 2014. On the others hand, Argentina all team members and total teams said, we are playing football for champions. So no alternative of champions.