Ei Golpe Bhalobasha Nei is an upcoming 2014 Bangladeshi Bangla movie. It’s an romantic action based Bangla movie. Arefin Shuvo and Tanha Mousumi are the leading role in this movie. The movie directed by Royal Anik. The movie written by Abdullah Zahir Babu. 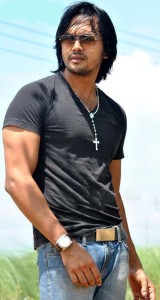 Romantic action based this movie starring by Arefin Shuvo, Tanha Mousumi, Bobita, Kazi Hayat, Doly Zohur, Aliraz, Shirin Bokul, Don, Dany Sidak, Misha Sawdagor and more. Now Arefin Shuvo is busy actor name in Dhallywood Film Industry. After first movie was released he sign many movie one by one. It is the seventh Bangla movie of his.

About this movie Arefin Shuvo said, ”Many films have received job offers. This movie was a lot more potential in her mind. They’re done. I hope I can give the audience a good movie.”

Arefin Shuvo and Tanha Mousumi is the new paired in Dhallywood Film Industry. Ei Golpe Bhalobasha Nei is the first debuted Bangla movie of Tanha Mousumi. Through this movie she entry a new world, which name is Bangladeshi Film Industry. She known her feelings about this movie, It’s my dreamy movie. So i try to my best afford.

Director Royal Anik said, romantic action based this movie will have for the audience at the film and the excitement of gimmicks. This film will making of high definition video gazette Red camera.”

Movie plot:
Tanha is a daughter of powerful family. She lives in District of boader area. She wants not to marry the family favorite son. That is why he fled from the house and took the train. Shuvo met him on the train. The boy let Shuvo married mother wants. But she does not want. So he took the organization Tanha fake wife.

Here you may find a new level of movie-offs. Putting the two of them can be played both in love. But this time, could learn Tanha that, Shuvo incurable disorder. Take him to start a fight for survival Tanha.