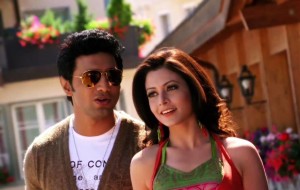 Koel Mollick and Dev is a super hit and popular pair in Tollywood film industry. This paired up a successful pair in Indian Bangla film. Their no comments of their popular in kolkata. For this they are known as bright star in Kolkata bangla movie sky. These paired up have given many commercial success Bengali movie, Such as Paglu series movie, Bolo na Tuni Amar, Mon Mane Na, Premer Kahini, Dui Prithibi and Raja Chanda Directed by 2013 Bengali movie under the banner of Shree Venkatesh Films Limited movie of Rangbaaz.

After marriage Koel Mollick reduced her signing Bengali movie. Because she wants to spents her time give her fathers family and her husbands family. We know she married in this years 2013 first time and her husband name is Nispal Singh Rane, who is the owner of Shree Venkatesh Films Limited. But Koel Mollick not give out film. Now her hands have few upcoming Bengali movie. These are Sudipto Chattapadhay directed by Highway with Parambrata Chatterjee, Raja Chanda Directed by Criminal 2014 with Tollywood super star known as Dev, Jeet, Dev and she starring Raj Chakraborty upcoming movie Mafia and 2015 years movie Ravi Kinagi directed by and with Jeet new movie Tuktuki.

Otherwise Dev is very busy in Tollywood film industry hit hero. Now he signed Bengali movie one by one may be itself wish or request. His hands have estimated one dozen upcoming Bengali movie. These movie are most of them Raj Chakraborty’s Mafia, Paglu 3, Buno Haansh by Aniruddho Roy Chowdhury, Kamaleshkher Mukherjee directed movie Chander Pahar, Raj Chakraborty directed King, Bastab, Amar Race and Disco Dancer.