Mahiya Mahi and Shipan Mitra starring by new upcoming Bangla movie Desha-The Leader (2014). It’s an political thriller based upcoming movie. It’s movie directed by Shaikat Nasir and produced by Jaaz Multimedia. The film will be released on (may be) 2014. 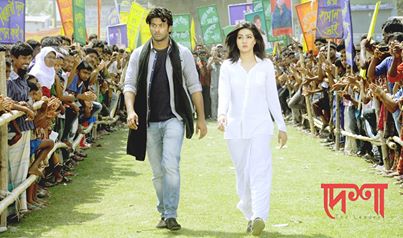 Desha-The Leader Bangla movie starring by Mahiya Mahi, Shipan Mitra, Tarik Anam Khan, Sohail Khan, Manjurul Karim, Shakil Ahmed, Shimul Khan and more others. Mahiya Mahi and Shipan Mitra are playing the leading character in this movie. Shipan Mitra is a hero, who is a political person in this movie. He is a honest and young political leader. On the others hand Mahiya is a TV anchor on a TV reality show. The reality show main goal is find out to a honest and popular political leader.

Release date:
Desha-The Leader upcoming movie release date may be in this year Eid occasions. The films music album will be released on next month.