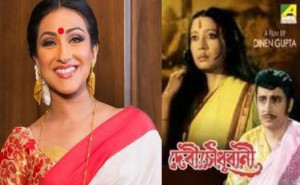 Rituparna Sengupta ready for taking the greatest challenge of her life. And will soon begin Bangkim Chandra novel ‘Devi Chaudhurani’ adoption of new movie and the name of the movie she is staying in the lead role. She said, it was a great challenge of her and the character of her dreams and she is getting inundated with such a film.

Satyajit Ray’s student were Uzzal Chakraborty. In 2010 he received the National Film Award for his novel “The Directors Mind Book”. In additon to the project in the long time thinking he will making “Ananda Moth” with Prasenjit Chatterjee.

Rituparna Sengupta said, he still did not get the script in hand. But naturally he is very excited about the whole thing. She also said, Bengali movie is going to be a landmark in the history of the ‘Devi Chaudhurani’.