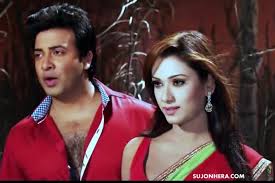 Shakib Khan and Bobby is a popular paired in Bangladeshi film industry. This popular paired only one bangla movie released. The movie name was Full and Final directed by Malek Ansari. The movie was released on 2013. Their paired upcoming bangla movie are Mental, Rajotto, Salam Malayasia and Hero-The Superstar etc. Eamin Haque Bobby upcoming bangla movie are Shapno Chowa with Symon Sadik, One way with Bappy Chowdhury, I Don’t Care with Bappy Chowdhury and Picnic etc.