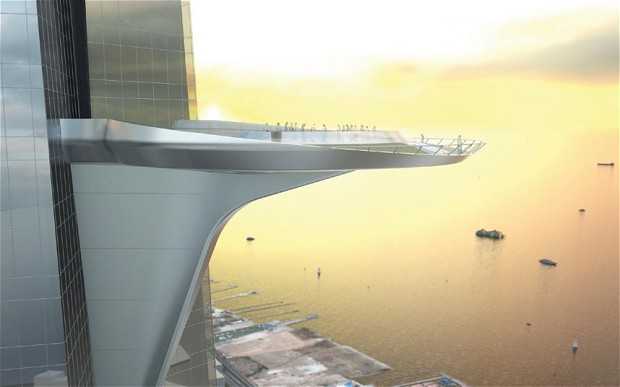 Height of one kilometer of the world’s highest building, the Kingdom Tower in Saudi Arabia is going to start building. Beach in Jeddah city is currently the world’s highest tower is built tower signs will be much higher than that of Al-Khalifa in Dubai. According to one report, the UK Telegraph reported.

Kingdom Tower will be the height of 3280 feet (1,000 meters). It is the world’s tallest tower according to the Guinness World Record by 568 feet or 173 meters higher than the Bruz caliphs in Dubai. Bruz Khalifa’s highest is 2716 feet or 827 meters. Building construction will begin next week.

Building construction will take approximately 1.23 billion dollars. Saudi Arabia’s 5.7 million square feet concretes and 80 thousand tons of steel to be used as built in this tower. It’s an very expensive building than others highest building in the World.

It will take five years to construct the building at 200 floor said by Saudi gadgets. Inside Red sea beach will have Five Star Four Season hotels, apartments, offices, and a monitoring center. And will have others sector in this tower.

Building the tower’s construction of a massive task and a challenge for engineers. Because of the nearby sea salt water as well as the need to protect from the effects of building structures. To this end, a variety of manufacturers of concrete building 200 feet deep foundation checked.

To protect the building from the technology challenge simoom hands. High-speed air to protect hands from building a huge challenge for architects. Not only this obstacles but also more obstacles have this built this tower.

In addition to the problem of creating a huge concrete building such a high place. Construction techniques can be used to tackle the problem at the Khalifa signs. In cold climates at high talagulote kankritagulo was provided using a pump.