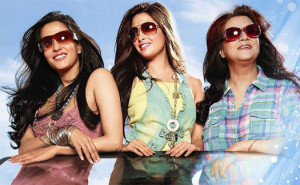 So far, none of which could be Mainak Bhaumik showed that the film can be seen together for the first time ‘Sensational Sen’s means Munmun Sen, Raima Sen and Riya. The film name is Kolkata Calling directed by Mainak Bhaumik.

But do not think that Mainak Bhaumik’s movie “Kolkata Calling” Sen family real life adaption. Munmun Sen this film can not be seen to be played just the girls here she is again on-screen mother of Riya Sen.

Very soon this film will start shooting in January. Mother and the girls can be seen in this film others chief characters starring by Shamrat Chakraborty, Kaushik Sen and Ritwik Chakraborty. The story and screenplay by Mainak Bhaumik himself and staying cameras by Gopi Bhagat.

Movie plot:
Kolkata Calling movie stories surrounding three women of different levels. Three different levels of people’s lives, but somehow causing the problem comes after three confusing and pointless. This photo shows the main highlights of the men, but women from different walks of life, regardless of the level of thought, but simply classless.

The film of the stories Riya and her mother’s surrounding. Riya’s character is a Young Lady, that barely passed college period confused about his own career.

Raima Sen surrounding the second story of movie plot. Her viewed by a sick woman, has given her so far D glamorized look. Her opposite co-actors by Shamrat Chakraborty and his role is N-R-I.

Ritwik Chakraborty surrounding the third story of this film. He lives in Shatragasi. He is a a young man of character actors in the struggle with the big stories of the enhanced stumped. The rest of the formulas tied to one of the three stories, Kaushik Sen staying in charge.