Main Tera Hero 2014 is an upcoming Hindi movie. The film starring by (main) Varun Dhawan and Ileana D’Cruz. The film is remake of a Telugu blockbuster super hit movie “Kandireega” was starring by Ram and Hansika Motwani released was on 12 August 2012. 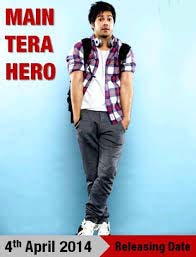 Main Tera Hero Hindi movie leads character playing by Varun Dhawan and Ileana D’Cruz. Varun Dhawan is a newcomer actor in Bollywood Film Industry. Only one movie was released of his and name was Student of The Year. This movie was released on 2012. There are quite a few movies in his hands now. These are – Main Tera Hero, Humpty Shamara Ki Dulhania, Sriram Ragavan’s untitled film and Mohit Suri’s untitled films etc.

Ileana D’Cruz is known as Telugu film actress. Her debuted film was Devadasu released on 2006. Her Bollywood debuted film was Barfi (2012) with Ranbir Kapoor and Jishu Sengupta. Her two Hindi movie was released as Barfi and Phata Poster Nikla Hero (2013) with Shahid Kapoor. Her upcoming Hindi movie are Happy Ending and Main Tera Hero etc.

Nargis Fakhri is called also a newcomer actress in Bollywood. Because  Main Tera Hero is the third movie of her. Her debuted film was Rockstar was released on 2011 and this film was very blockbuster on Bollywood box office. Her upcoming Hindi movie are Shaukeen, Hello 2 and Shivam etc.