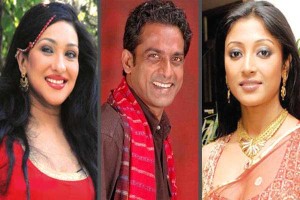 Parapar is an romantic drama based Bengali movie. The film will centralized three character are Ahmed Rubel from Bangladesh, Rituparna Sengupta and Paoli Dam. It is the first Kolkata Bengali movie of Ahmed Rubel. He has starred in several films. One of his movies were: Aakhri Hamla, Ke Oporadhi and Humayun Ahmed’s liberation war movie Shyamol Chaya etc. His starred many TV drama and serials. Ghora Mojid, Pret, Swapnojatra were the most Television popular drama and drama serial.

Paoli Dam and Rituparna Sengupta are the most popular actress in both Bengal. They each have two Bengals played in numerous films. And they each two equally popular in Bengal. Ek Cup Cha is the new upcoming Bangladeshi movie Rituparna Sengupta. Her others upcoming movie are Devi Chaodhurani, Hindi movie Extraordinary and Chalapor etc.

Ahmed Rubel said,it was my dream to make movies himself. I think career first played in several films. But not much later. Were expected to work in films in Calcutta. The story of the movie is amazing. Here I’ve played the central character. I believe a lot of the audience will like the movie.

Parapar Bengali movie shooting was started on 16th December 2013 in various shooting locations of Kolkata. The movie shooting end may be in a short time. Director said, in 2014 will be released this movie in Kolkata.