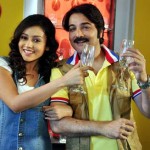 Nipun is a popular film actress in bangladesh. she is busy now Reality show, Advertesment, Drama and Stage show etc. Recently she was acting a serial drama in Bangladesh. First time Nipun acting kolkata bangla movie. Her co- actor Prasenjit. she said, it,s movie have two leading role. Prasenjit play one of leading role and others role play Ferdous. They are two brother in this movie. She said, Ferdous discuss for acting about me with Porichoy movie director Rupali Chatterjee and producer Shomu Gaowal. At least they are selected me for acting porichoy movie.

Otherwise Ferdous is very popular both in kolkata and bangladesh. His have many blockbuster movie in both two bangla.Hotath Bristi is the turning point of Ferdous life.