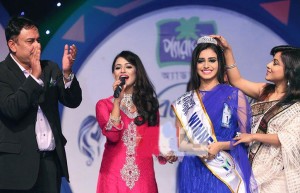 Stylish Hair of the campus’ crown won in 3 million expected to competition at Mymensingh young woman, Rokeya Rashed. She got 3 million in prize money. This student came to the Women’s Government College at Mymensingh  plays a role to fest in Gazi TV.

Last 25th June 2014 night it was a splendid at a city hotel Radisson Hotels ‘stylish hair of the campus’ competition organized. Beliful Parasuit advanced conduct this program me.

The first runners up in the competition, a dramatic student of Dhaka University Atasi Amin. He found 2 lakh taka. Second Runner up prize of 1 lakh taka and she is Raina Rubaiya and she study in Women Degree College in Mymensingh. As expected to the two played any person getting a chance to play.

Rani Bhavani College of Natore student Airin Sultana got the best stylish branded. She gots 50 thousands of his prize money. Getting the opportunity to work as RJ in Radio Today Renaissance Khan in Top egarote available space. The rest compettitors got 25 thousands taka prize money.

Seven divisions of the countries 300 campus participated in the competition. In all the 3 million girls registered. One of them held up the best 11 competitors, ranta episodes. On day, the three-judge the actors – Zahid Hasan, beauty expert Afroza Parvin and Redwan Rony. The final episode of the 11 participants from among the judges of the dance, acting and performance, based on ryampa had to pick the best three. Program at Gazi TV campaign from June 6 to 8pm.

‘Stylish Hair of the campus started in September last year. According to event organizers, the talented girls showing their talent and their fulfillment of the target platform build up.

After the initial phase 20 thousands of the girl and the two thousands of you have chosen to create a portfolio of photography and daughter. 10 June, 100 people took their pick from the tribunal. 13 and 14 are selected to verify the performance of the best of June 1 people. This is 1 of the Residential Training Program June 16. These are well-known trainers in the country operates. 19 June, the top 11 were chosen.