Tever 2014 is an upcoming action mashala based Hindi movie. It’s movie directed by Amit Sharma. It is a remaking film of Telugu Okkadu starring by leads character Mahesh Babu and Bhumika Chawla. It’s movie produced by Boneey Kapoor and Sanjay Kapoor. It’s making under the banner of BSK Network and Entertainment. 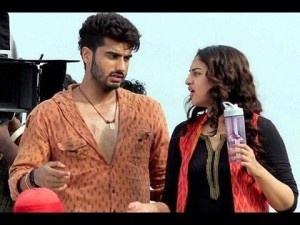 Tever is an action based upcoming Hindi movie which starring by Arjun Kapoor, Sonakshi Sinha, Manoj Bajpayee and more. Arjun Kapoor and Sonakshi Sinha are playing the leading character in this movie. It is the first time paired of their. So they are both highly expected to this movie.

Amit Sharma is the new director in Bollywood film world. Tever is the debuted movie of his. So he said, it’s my dreamy production.  He also said, Manoj Bajpayee palying the leads vilain in this movie. We expected that Arjun Kapoor and Sonakshi Sinha onscreen chemistry is very well.

Release date:
Upcoming Hindi movie Tever will be released on Indian cineplex and instead of outside of India. A trusted source inforn ours that, Tever hindi movie will be or may be released date on 04 July 2014.