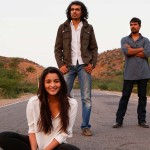 Newcomer Bollywood actress Alia Bhatt is now time katacchena Imtiaz Ali directed romantic movie ‘Highway’ -‘s shooting. Alia the ‘highway’ is a special film for him.Bollywood actor movie ranadipa shove bemdhechena pair with 20-year-old actress said. The film will be released on December 13 last year. Alia was posted on Twitter, “the film will be released on December 13. The last few days we’ve Delhi street shooting. I do not believe so quickly. Recently Promoted ‘Highways’ movie poster thanks everyone for the response jagiyeche. This is a movie for me. ‘Highway’ movie 6 different countries, two different people on a tour to promote her story.