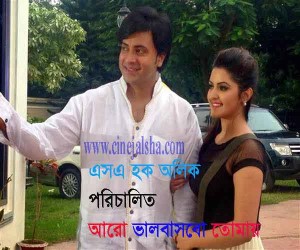 Aro Valobasbo Tomay movie directed by popular and hit movie director S A Haque Alik. It is the fourth Bangla movie of his. His first released movie was Hridoyer Kotha starring by Riaz and Purnima. His others movie was Akash Choya Valobasha by Riaz, Purnima, Razzak and others. And third movie is Ek Prithibi Prem by Asif and Airin Sultana and last announced movie Aro Valobasbo Tomay by Shakib Khan and Porimoni. Last two movies are waiting for released and making.

Shakib Khan and Porimoni is a new paired up in Bangla movie industry. Aro Valobasbo Tomay is the 2nd paired up movie of theirs. Their first acting movie is Dhumkhetu. The movie now waiting for releasing. The films others artists are Sohel Rana, Champa, Sadek Bachchu, Afzal Sharif and others.

After a long time later Champa come back in film. She said, Alik is good and talented director in Dhallywood. On the others hand Shakib Khan and Porimoni as co artists so good. Porimoni and me it is the 2nd time acting. Ours first work is Second Innings drama on Asian TV.

At presents a big news that any movie released before Porimoni is considered a newcomer hit heroine. But not now her any movie released. Now she working Mohuha Sundori, Dhumkhetu, Mon Janena Moner Thikana, Surprize, Probasi Don and others etc. On the others side Shakib Khan now busy his upcoming movies My Darling, Purno Doirgo Prem Kahini 2 etc.