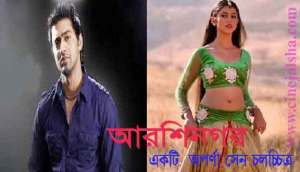 Upcoming Bengali movie Arshinagar story centralized by Shakespeares by romantic story Romeo Juliet. Absolutely it is the fully romantic movie. The movie making under the banner of Shree Venkatesh Films Limited and produced by Sri Kantha Mohta and Mahendra Soni.

Dev and Ritika Sen is a new paired up Kolkata Bengali film industries known by this movie”Arshinagar”. Dev is known as chocolate boy in Kolkata and on the others hand Ritika Sen is a young newcomer heroine. Her first debuted film was “Borbaad” and it is the movie as heroine.

Aparna Sen directed upcoming romantic Bengali movie released date on may be in this year month of December, neither Dev and Ritika Sen upcoming movie released on next 2016 in first time. However the movie song and trailer will be released on YOUTUBE the occasion of Puja and Eid.