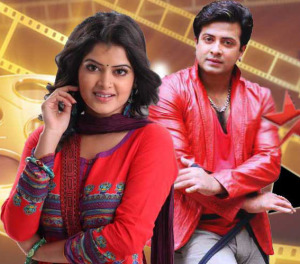 Modhumita Sarkar is known as Pakhi character of Megha serial of Star Jalsha ” Bojhena Shey Bojhey Na”. She is very known both two Bangla. Director Badiul Alam Kokhon try to her fame for their movie. For this reason he contract with Pakhi fame Modhumita Sarkar.

Badsha movie filming will be started on November 2014 last week. The movie scene captured to be in various charming and enjoy able locations in Bangladesh. The film shoot not only in Bangladesh but also in foreign country. The film lyrics written by Sudip Kumar Dip and Music directed by Ali Akhram Shuvo.

Released date:
Shakib Khan and Modhumita Sarkar starring by upcoming Bangla movie Badsha wll be released on 2015. In this year last time will be started on this movie filming and if all side is okay then the film scene captured to be the end time of 2015 in mid time. So we know that the released date news the film by a trusted sourced.