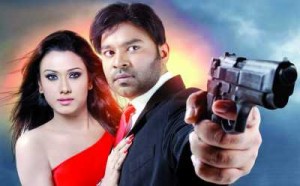 Modern technology to create a full film Dehorokkhi (The Bodyguard). The movie is pretty at all locations have been contain in Bangladesh. Beautiful love songs of all overseas locations has been contained abroad. The film is expected to be passed by area work abroad with success.

Anisur Rahman being the first commercial movie Bodyguard. Prior to his work in film art. Maruf and Bobby with of his first work. However, this is the first work of three. because I did not work with anyone. He said, it depends on whether he is a regular films?

Iftekhar Chowdhury managed by ‘Bodyguard’ film to film a new record for Bangladesh. 12th April to get the film released in 75 cinema has an agreement with. I have one more week. The more of a 25 theatrical release for the film’s producer, said the theater by authorities in Adita. And if it is, it’s theatrical release before 80 said P.A. Kajolmovie “Ek Takar Bou” together over one hundred records the movie’s release will be entitled to Bodyguards.

Adita said, ‘Jazz multimedia cinema with 60 theaters and rain Pictures to 15 done agreement. The film was released in 25 theaters in the provision of projectors themselves. Hopefully, this week we are taking the necessary measures to be able to. ‘ Iftekhar Chowdhury said, ‘We’re right in the movie to get a response. The owner of theatre about this film is sincere enough. If not, we would have less equipment, then maybe we could release at least 50 theaters.