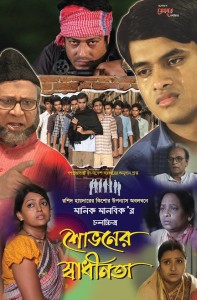 Immediate after the black night of 25th March in 1971, Dhaka has turned into a city of dead bodies. With the live threats, people are fleeing anyway what they can manage. Shovon’s elder brother Sumon left for India to have a training to fight for the liberation war. The city has turned entirely unsecured. Especially the growing adolescent boys and young men are facing wider danger. Anytime the military are capturing them and they become totally untraceable. In this situation, his parent along with Shovon got to visit his second-born uncle’s house in the village. Sumon father is a government employee. So they were to go back to the city. The adolescent boy Shovon who is supposed to attend the secondary school certificate examination, is staying apart from his parent for the first time. He gets depressed.
But after his parent’s departure, Shovon got to reveal that his uncle is opponent to the independence. Enjoined with Pakistani army, he is operating indescribable tortures against the unarmed village people who desire for independence. Shovon revolts him. On argument with his uncle, he leaves the village.
Coming back to the city, Shovon doesn’t feel comfortable even. The reason behind is his parent’s anxiety for him. He becomes increasingly lonely. On the other, his helplessness for doing something for the country in such a devastating situation makes him worried. He also finds the thoughts of his classmates namely Zahir, Jewel and Bulbul distracted. Other classmate Badal is an extreme supporter of Pakistan. In many issues, Shovon had disagreements with him. In consideration of time and situation, Shovon was forced to tolerate Bafal’s audacities.
Coming back from the training, Shovon’s brother Sumon appeared in the war. He plans to reprove against his anti-liberation and Muslim leaguer uncle. He doesn’t get vindictive. He enjoins uncle’s son Noor in the liberation fight. He got tempered in anger and grievance. But he has nothing to do. On the other, uncle’s daughter Moyna keeps updating her lover Sumon about all of her father’s crimes. Though she desires for the victory in the liberation war and the independent and sovereign Bangladesh, she is always chased by the fear to lose her lover Sumon. So she always tries to keep him unharmed. But fearless Sumon is adamant and determined to his commitment. So, led by Suman, a freedom fighter’s group appears. They attack on the depots of the invading army and their associates.
On the other, Shovon is upset. Always, the longing for doing something for the country keeps agitating him. He likes to join the fight like his elder brother Sumon. As he is younger and underage, his parent and elder brother Sumon do not consider him. But he cannot support his parent’s and brother’s decision.
With a secret desire in mind, he roams here and there. While visiting one of his school friends, Sushils’s house, he becomes aggrieved at another turn. All of a sudden, a very simple and modest boy Sushil is untraced. His mother Sarada has loosened her mind with the sorrows for her son. Shovon gets more worried when the local Pakistani associates Razakars and Al-Babadars displace Sushil’s family from their homestead. The missing of Sushil and the distress of his family brought him in a fresh commitment. Now it’s his turn to do something adamantly.
But he was confused about what to do, how to do and where to go. He cannot manage to communicate with his classmates Zahir, Jewel and Bulbul. Even he fails to know where and how they are doing.
On the other, the secondary school certificate (SSC) examination is approaching. Parents and brother Sumon want him to attend the examination. But through attending the SSC examination, he cannot support the continuing cruelty of Pakistanis. But he hides his thoughts in mind.
In between, Shovon got to get a leaflet that calls upon the SSC candidates to boycott the examination. Beyond Shovon’s knowledge, it was the deeds of Zahir-Jewel. He got to toss about with the excitement. Shovon wants to join with this unknown group.
But he got to meet Badal who is opponent to the independence. He suspects Shovon for disseminating of the leaflet and the misdeeds to foil the examination. An argument and quarrel came up between them. At a level, Shovon calls Badal a ‘son of a Razakar’ derogatorily out of anger. But immediate after uttering the words, he realizes that he has done a great mistake. That fells him in a runaway.
But Shovon cannot save the situation. After a runaway, Shovon came back home and had his parent’s concurrence for joining the fight, he was captured by the military.
At the departure, Shovon was only regretting that he was to lose his live without doing anything. The regret agitated him increasingly that he and his tiny and cautiously protected live couldn’t be at any benefit of the country.
But the death of Shovon didn’t get useless. Two days later, Badal who caused death for Shovon, was hatefully killed on fire by Shovon’s classmates Zahir, Jewel and Bulbul. Through killing Badal, they engaged themselves in the direct freedom fight. Cause, they must have to bring the independence for Shovon and his death must be meaningful.