The film’s best pair up Salman Shah and mousumi starring by “Ontore Ontore” are going to be remake again. The young film makers Atik Rahman by going to manage. Newly acting in the movie Ontore Ontore model, actor Nirob and newcomer Amrita Khan. 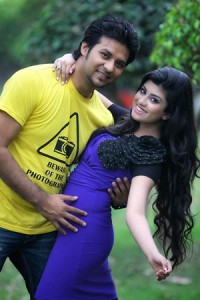 Remake the film Atik Rahman by the end of March pubaile planning to start shooting the movie. The hero of Nirob are many ways to prepare yourself for the film.

The hero of Nirob banglanews said, I Salman Shah`s fans. The best represent the movie of Ontore Ontore. There are many fine works have played Shan. Naturally, the challenge of the film. I want to work with the challenge. And I believe the viewers would see the film a new me. It looks inosenta Amrita. The picture was of a character for this movie. We hope Amrita will do well.

Newcomer Amrita Khan film starring character of Jinuk do. This is her second film starring. The Nirob with another pair of films are. Name the movie Game.Royal and Anik jointly directed by this Game movie.The movie is currently around 40 percent work has been completed.

Now Amrita Khan to think of new movie character. The Banglanews she said, My media career began with dance. After modeling. The film will work right. The Ontore Ontore remakes movie. There are a number of dance scenes in the film. Where I want to present yourself well. ”

Amrita said, I am a student of English medium. So I can’t speak correctly Bengali dialogue or trying to dominate you. I did a lot of afraid in the first film. Now I do not afraid. I hope viewers will a new Jinuk character to get me.

Director said, The shooting of the film at the end March of the month pubaile, Cox’s Bazar, Saint Martin,Tangail Jamindar Bari.Â  The new design was to create a new movie for the song has been capture sequence.Â  Asha Production from the film director has already purchased the copyright.

However, I have a new the voices of the generation of artists this song. InOut Imran, Kona, Nowmi with talk primary final.

The new century, the movie will look a new at the ‘Ontore Ontore’ of our viewers.Nirob and Amrita played with them again for Bengali film can make people think by the desire.