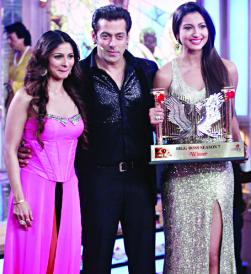 Within the previous three seasons, is the crown of women. Anthropology is so. The popular reality show ‘Big Boss’ won the women. Tanisha Mukherjee lost ‘Big Boss Seven’ Gauhar Khan won. Over the last 104 days in addition to the trophy she received 50 million rupees.

Kushal Tandon in love with fellow contestant on the reality show compliance often involves negotiations born Gauhar Khan said in his response, “I would like to thank the family for support. I am also a big fan of this event. I do not think able to come so far.

Integrity and calm disposition did not become champions had won the audience mind Tanisha Mukherjee. He said, ‘I did not get much love. It was an incredible experience.”

The final episode of the last four contestants Songram Singh and Ajaz Khan as well as the Gauhar Khan and Tanisha Mukherjee. The first fight, then the fight came out Ajaz is limited to the first two. Gauhar Khan was the ultimately wins.