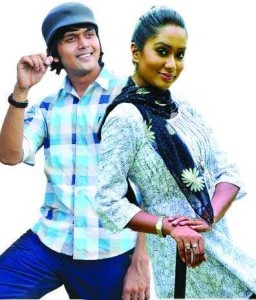 The paired up together Dhallywood popular hero Arefin Shuvo and actress mom . Movie name Chuye Dile Mon. Shihab Shaheen film makers operate in the textbook. It is the debuted film of his. He is a popular drama director in Bangladesh. His works were most of them Mon foring Er Golpo,Nil Pori Nilanjona,Nil Porjaporti,Monsuba Junction,Valobasi Tai Valobeshe jai and x Factor etc.

Shihab Shaheen said, we would start shooting the next movie from the date of May 1. Before that I had built up a budget tele chobi. Telichabitira name ‘Bhalobashi Tai Bhalobeshe Jay”. Arefin it was good. My first film, so I’ll work with Shuvo. And I think everyone will like Momo with Shuvo.

The organization said the story of the movie, a boy and a girl kisorasamaya made ​​friends with. If an accident occurs due to a sudden two of them away from one another. After a long time the boy came back. Find his missing girl friend.

Happy in this regard, said the story of the film has such amazing chemistry. The organization’s brother’s back, I’ve done telichabite. Hopefully the movie everyone will like.

Filming:
Chuye Dile Mon upcoming movie filming has already done. Director said, Next month May1 2014 will be the fixed time of this movie filming.