Edge of Tomorrow is an upcoming science fiction Hollywood film. The film based on Japanese famous novel “You Need Is Kill by Hiroshi Sakurazaka. It’s film directed by Doug Liman and produced by Erwin Stoff, Gregory Jacobs and Jeffery Silver. 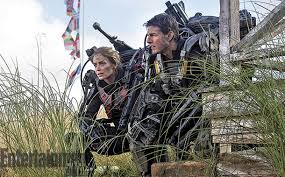 Tom Cruise is known as super action hero in Hollywood. His popularity in the whole world. He is also known as Mission Impossible fame hero. This series film were very popular in all over the world. The film leads character playing Tom Cruise and Emily Blunt. Tom Cruise character name is Lt. Col. Bill Cage. His had many movie released of Bollywood. His first debuted movie of Endless Love was released on 1981. His movie were Taps, The Outsiders, Top Gun, Legend, Cocktail, Far and Away, Mission: Impossible series movie, Eyes Wide Shut, Rock of Ages and Knight and Day etc..

Edge of Tomorrow is the super science fiction upcoming movie. It is the underworld thriller movie. In this movie main culprit are Alien, which the threat for human life. Tom Cruise is a brave soldier , who fight for humanities.