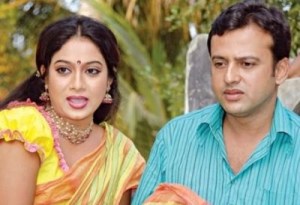 Sabnur is known as Dhallywood beauty queen and most popular actress in Dhallywood. Her every movie were blockbuster hit. But various reason she breaks from movie. Such as a long times she spends in Australia with her sisters and her breaks most of the reason is her marriage and a few months ago she becomes mother. Now she is in Bangladesh and singed a new movie ans the movie title is “Jonom Jonome”.

On the other side Riaz is an extra ordinary film hero in Dhallywood film industries. Salman Shah after death he becomes a most popular hero in Bangladesh. He is a talented actor and he known as Bangladeshi lover boy. Like as Sabnur he breakes from Bangla movie. Sometimes he acting various TV natok. His last released movie Shohanur Rahman Shohan directed movie ” Lovhe Pup Paphe Mritthu” with Dhallywood one’s beauty queen Purnima.

Salauddin Lavlu directed blockbuster hit movie was ” Molla Barir Bow” starring by Riaz and Sabnur. In our country every hall the film was running one or two months. The movie was the commercially legendary movie in Dhallywood film industries. Again three stars coming in onscreen to upcoming movie Jonom Jonome.