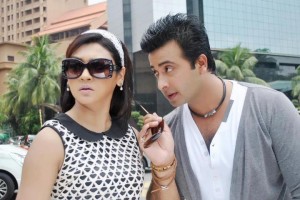 Joya Ahsan her career started modeling and TV actress. At now she introduced Gerilla, Chorabali and Indian bangla movie fame heroine in both two bangla. Recently she is busy her running movie. At the same small screen artist Arefin Shuvo coming in film and he try to make a place in film media. Wow Baby Wow, Tumi Amar Priyotoma, Chaya Sobi his are upcoming movie.