Maliha  won the Meridian Channel I Khude Ganraj 2013. The room was the fourth. Last Friday 11th October, 2013 was the held Meridian channel I Khude Ganraj 2013. The ceremony ended with a gorgeous ceremony. Grand Finale Competitive round was 5. The first runner-up in the competition have been living in Netrokona. His name is Sajib. The award is given to him three million Taka. The second runner-up is Ratul living in Khulna. He handed over the cash two million Taka.They have received education scholarship and medical opportunity. Other finalist was Raisa and Subarna. 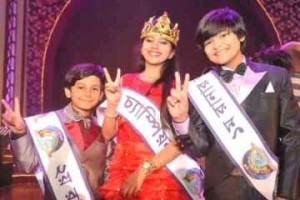 At a glance of Meridian Channel I Khude Ganraj 2013
Champion: Maliha in Khulna
1st Runner-up: Sajib in Netrokona
2nd Runner-up: Ratul in Khulna and
Others finalist: Raisa and Subarna.

I have overcome, flooded Maliha passed in response to a small capricious,”I will pray for you”. I want to go to a lot of music. ‘The event was the presentation Tanisa. This programme directed by Ezaz Khan Swapan.