Morichika upcoming bangla movie starring by TV star Tahsan and newcomer model actress Nusrat Faria Mazhar. They are playing the leading character in this movie. Morichika is an drama and romantic based upcoming movie. 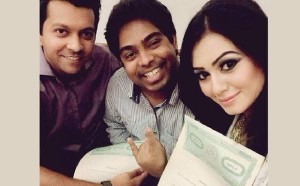 In this movie Tahsan playing agency director role and Faria’s character is photographer. With the two of them will be added to the two-star. They are, however, things could still decide to Rony.

Do not ever make films Tahsan and Faria but Why did the movie’s main characters – Asked Ronnie said, “I have enjoyed my story Tahsan for the character of the hero. Her presentation has the looks, she’s a smart girl. He talked the situation could easily cope.

The first time getting to play movies, Nusrat ‘fairly happy’. Nusrat said, “I always wanted to start a film career. Amazon got a lot to offer. The story was good. But did not mind. At first I was confused say yes. I became fascinated to hear the story of the movie.

Nusrat moment in movie making preparations. In addition to watching movies, doing lots of acting, he studied various techniques. Himself for the movie ‘Perfect’ Would he make. Because, he thinks the film ‘success’ depends on E Her acting career.

Rony said, The first episode of the story was not as mind. Wanted to put in more characters. So write it. However Tahsan and Her character remains the same.

In 2006 ‘Urojahaj’ by Rony came administered by Telefilm. Then he made ​​besakati plays and series. Created her in a long series of ‘Housful’, ‘FNF’ and ‘Radio chocolate Reloaded. Amazon has the ‘Thala’, ‘Listening to the stories of a Radio Jockey’, ‘mother sahasini 1971’, ‘Proof Reader, etc.