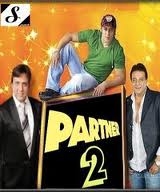 Partner-2 based on full romance and comedy. This movie shooting running. This movie music not released. Hope coming soon this movie will song released. This movie will be released on August,2014. David Dhawan and Salman khan are very good friend. They both were together given hits movie ” Mujhse Shaadi Karogi (2004) and Maine Pyaar Kyun Kiya (2005).