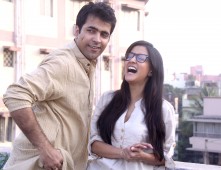 Raima Sen and Abir Chatterjee are playing the leads role Abhay Sen upcoming Bengali movie. They are a new paired up in Kolkata Bangla Film Industry. There first bangla movie was Baishe Sraban, which this movie was released on 30 September 2011.

Abhay Sen Bengali movie main story is centralized by a unemployment and dreamy man. Who wants to done a good job. One day he going to 1980 years help by a scientists on ride by Time Machine. Then started on clash of reality and fantasy. Director through this movie took various social problem.