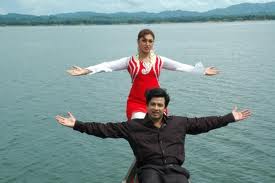 Raja Handsome is  fully romantic based upcoming Bangla movie. The film leads character playing Top hero Shakib Khan and Apu Biswas. It is the first time Shakib Khan which any one Bangla movie producer. They paired up chemistry is very well for Bangladeshi Bangla movie.