Sindoor Khela 2016 tollywood film. It’s an dramatic and romantic love based upcoming Bengali movie. The film directed by Rabi Kinagi and the film making under the banner of Shree Venkatesh Films Limited. The film produced by Srikantha Mehta. The film release schedule is 2016. 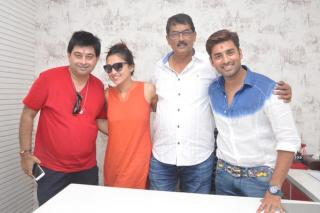 Sindoor Khela (2016) is the second starring movie of Ankush Hazra and Mimi Charaborty. Theirs first romance movie has Jamai 420. Although Jamai 420 movie Ankush and Mim not chemistry movie. But here theirs chemistry will be hit.Ankush Hazra said, Mimi Chakraborty is a powerful actress, we are together acting by enjoy. Now i am acting new three movies. The movies are Premi o premi, Niyoti and Sindoor Khela (2016) etc.

Mimi Chakraborty now acting this movie, Raj Chakraborty directed Katmundu and Birsa Dasgupta’s untitled movie with Dev. Mimi said Sindoor Khela (2016) is the third movie with Rabi Kinagi sir. He is  a good and our favorite director. So always i acting with his very easily and as enjoy able. I expected that the film undoubtedly will be hit.

Sindoor Khela Bengali movie will be released date on 2016. The film trailer may be released on November 2015. Rabi Kinagi said the film song serially will be released on December by Shree Venkatesh Films Limited YouTube channel. Here you can be gets all update or recently released movie trailer and songs etc.

Please given yours opinion about the article and website. By Facebook fan page you givens your comments.