Katrina Kaif and Akshay Kumar is a very popular paired in Bollywood film industries. They are together again presence onscreen by Prabhudeva’s upcoming movie “Singh Is Bling”. The film will be a action based movie. The film making under the banner of Grazing Goat Pictures Pen Movies. 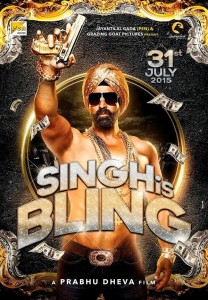 Through Singh Is Bling audience can again seen Akshay Kumar and Katrina Kaif paired. Romantic and action any movie they paired will be success, because past of this evidence. They are blockbuster and all time box office hit movie were Welcome, Namastay London, Humko Deewana Kar Gaye, Tees Maar Khan, De Dana Dan, Blue and Aasman etc.

The famous dancer and director Prabhudeva and actor Akshay Kumar again coming soon presence in Bollywood screen to Singh Is Bling.Their paried means the screen shaking of Southern mashala movie. Had seen the last of these two pairs Raowdy Rathore’ movies. The taste of success over the ‘Singh Is Bling’ movies are about to be presented at the box office back in July with Akshay  and Prabhu.

Before already faced a beard, a turban on the head of the ‘Singh Is King’, Akshay Kumar was shaken the movie screen. However, Singh once again be adorned about the action packed Bollywood Khiladi.

Jayantalal gada produced by is very interested Akshay Kumar and Prabhudeva making this movie. Think the whole team is to be reached before the release of the movie 300 million club.

Prabhudeva said,  we are quickly started the film filming. Katrina Kaif now busy her upcoming movie Bang Bang. So her shooting part after end we are started our movie shooting captured. Firstly we shoot Singh Is Bling movie song shooting. So our whole team going to foreign for son shooting captured.